Fight the Power: A Review of "Misspent Youth" 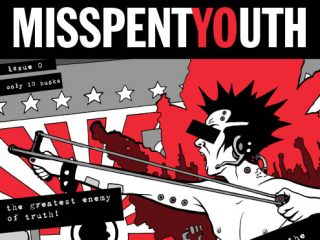 WARNING: This RPG contains frequent instances of strong language, and is therefore NSFW. The review will follow usual blog guidelines, and be SFW.

Misspent Youth is a game about adolescent rebellion and sticking it to The Man. It's also a game that completely took me by surprise, doing things that I never even considered doing in a game. It's loud, authoritative, intense, character-driven, and even tragic. It's also a great example of a tightly focused game; instead of giving you the tools to make certain elements of drama happen (this is the case with roleplaying systems), it structures the game so that certain things just happen.

Standing Up: the Premise
There's two themes at the core of Misspent Youth. The first is rebellion: the game is all about standing up to The Authority, which (like Big Brother from 1984 or the society in charge of The Giver) is a totalitarian body in a dystopian setting. It has abused its power and needs to be stopped; this is the job of the Young Offenders (YO's), which is this game's term for the player characters. (I'll make a side note here: I love the evocative language that this game uses. By utilizing very specific terminology, it precisely targets a specific set of themes, and does a great job of placing the characters in a particular role.) The characters are here to stand up to what's wrong in this world, and to stop The Authority for good.

At the same time, the game covers a far more subtle and far more difficult theme: the loss of innocence. The theme of rebellion is all well and good; I, however, find the strongest meaning in the game's secondary theme. As characters struggle, they'll probably face defeat a great many times; that's just how the odds are stacked. Their loved ones and innocents will be hurt or killed. If a failure is imminent, the YO's do have one option: selling out. When a character sells out, one of their personal traits of youthful, innocent rebellion is altered and hardened. A Quick character will become coldly Efficient. A "Bossy know-it-all" will become a "Ruthless leader". The theme is clear: nobody escapes without scars. Sometimes, the sacrifice for victory is your own innocence.

Building a Story: Narrative Structure
The structure of a game of Misspent Youth looks like something from a scriptwriter's handbook. Every session of the game goes through the same seven stages, wrapping up one story amidst the larger narrative of the YO's lashing out against The Authority. This is one tool out of many that helps to keep the game engaging and well-paced. Tension will ebb and flow as the session moves on, and there's a defined end. As a GM who's seen plenty of sessions drag on without a nice resolution, something like this is invaluable to rely on.

There's also plenty of player engagement in the plotting. At the start of play, before any of the story starts, each player contributes a part of The Authority's means of repression, a System of Control such as mandatory chip implants or an overwhelming secret police presence. Then, at the start of each session, each player gets to ask a "friendship question", an intentionally loaded question which simultaneously establishes a fact about the relationship between their YO and another player's YO and provokes a response about it. With players feeding into the game, the world and drama become far more varied than a single GM could hope to outline in preparation. Players, due to the "selling out" mechanic, also have a lot of control over whether some things come to pass, although this is at a price.

The implicit structure of conflict also helps to keep the plot moving along at a fresh pace. Every scene (of the seven scenes in a session) is brought to some sort of a head, as The Authority threatens to do something bad, and the GM asks, "Who will stand up?" The player who wants to take the spotlight at this time (there's a presumed gentlemen's agreement that players will trade off) begins, escalating the conflict in a process called The Struggle, a craps-like resolution mechanic that involves multiple steps and multiple characters' traits. When the dust settles, one side achieves their objective and frustrates their opponent's objective.

Spunk and Wisdom
Misspent Youth, in the end, is a remarkable example of how a roleplaying game can be primed and charged to a very specific and powerful point. It's a game that, after reading, I couldn't wait to try out, imagining all sorts of settings that the motif of young, spirited rebels losing their innocence could fall into. My current top idea, which I'll probably wind up running with some group, is a group of adolescents running their own spaceship after the fallout of Serenity, running afoul of the Alliance and causing havoc in the 'Verse. Sounds pretty shiny to me, actually.

Anyhow, I strongly suggest that any readers who are not offended by the strong language go pick up this game! As an added plus, the author has made the PDF for the print version available, free, for anyone. As I think you'll see, however, this game is so well done that I immediately wanted to shell out $25 for the print version, once I had the spare cash.
Inscribed by Andy Hauge at 1:34 PM